When Board President Marlys Davidson entered the room, the audience erupted. “Resign!” shouted some people. “We love Marlys!” yelled others. Many got out of their seats, waved their signs and raised their voices creating a raucous start to the night.

The mood mellowed after Supt. Dr. Andrew Pulver reminded attendees that people cannot yell when someone else has been recognized to speak and that the gavel would be used if someone is out of order to ensure “decorum at our meeting.” Seconds later, Davidson officially started the meeting.

A large turnout was expected. That’s because it was the first meeting since a video from the last meeting revealed Board President Davidson cursed at a parent under her breath following the parent’s public comment and muttered, “Oh God here we go,” before another parent spoke. Picked up by a hot mic, the remarks were only audible on the livestream of the Oct. 26 meeting. Clips were shared on social media including by proponents of an effort to recall three trustees. The incident fueled many segments on conservative media outlets and made national and international headlines.

It also sparked calls for Davidson’s resignation. She has apologized and said she does not plan to step down.

During Board communications at the Nov. 9 meeting Davidson said, “I make no excuse for my actions and I deeply regret the turmoil I caused, specifically to the two women most hurt by my words. I’m deeply sorry for the pain I caused each one of you.”

Nevertheless, Lauren Roupoli, the parent who last spoke before Davidson cursed, remained steadfast in her position that she should step down.

“You are not a role model,” Roupoli said during public comment at the Nov. 9 meeting. “You’re an embarrassment to the school board and to this community. And I demand that you resign today because the parents standing behind me will no longer settle for anything less.”

Many speakers echoed Roupoli’s sentiments. But others, including fellow trustee Diana Hill, showed support for forgiving Davidson. The other board members did not comment on it during their communications.

The 43 speakers at the Nov. 9 meeting can be grouped into three rough categories:

We caution that the commenters at the meeting only reflect the people who showed up and chose to speak. This is an attempt to concisely present what happened at the meeting. You can watch all of the comments online starting at the 57-minute mark and ending at 2 hours 27 minutes.

Fourteen people spoke in support of the board and its policies. Eight of them specifically mentioned Davidson.

Thirteen people spoke out against the board, its policies and in support of efforts to recall trustees. Of those, 11 specifically asked Davidson to resign.

Gerri Mejia, a former mayor of Los Alamitos, was one of them.

She said: “I don’t have anything against you personally. I just think that you should do the honorable thing and step aside because it has been something that’s negatively impacted this community. And it isn’t fair to all of us because we don’t run around saying those things because you represent us that makes it look like we’re condoning what you did.”

“I’ve been involved in political campaigns since Robert Kennedy’s in 1968. And I’m telling you that if you don’t resign now, your F-you clip will be heard in every conservatives’ campaign ad in 2022. If you really cared, then set your ego aside and spare us that embarrassment and humiliation and show your real respect for this community by simply resigning now,” said Hope Horning.

“Marlys has no place in this board because of her disrespect and complete contempt for the parents. No apology can erase her true attitude. That is the problem. It’s her attitude,” Kim Francke said.

Other speakers were more forgiving and supported Davidson staying on.

“Although I agree that no one should be cussing at people under their breath, we all have our limits,” one parent named Nicole S. said. She spoke about how critical public comments at board meetings have been over the past twenty months. “Marlys has apologized and I hope we can all agree that she is a fallible human just like the rest of us and I hope we can move forward so she can continue to help to do what is best for the students and the community.”

“We’ve all made mistakes. But what’s been lost here is that you are a great example of what to do when you make a mistake. You own it and you apologize,” parent Leland Jay said.

“I voted for Marlys Davidson. I would continue to vote for Marlys Davidson,” said Tara Farayian, who praised Davidson for apologizing and admitting her flaws. “That’s what we tell our children to do when they make mistakes, not to let that define them, but allow that to be a learning point to continue to grow.”

At least two speakers lamented the division in the air that night. That included the final public speaker, a mother named Julia B. who said it was her first board meeting.

“I’m listening to everybody speak. There is such a separation, which is not something I want my child to grow up in, nor do I want to be in,” she said and added that she thinks it’s the parents’ voices that should matter most. 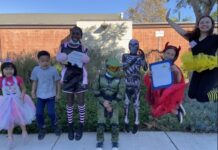