More than a hundred protesters lined the sidewalk outside the board meeting room of the Los Alamitos Unified School District on Monday seeking the resignation of President Marlys Davidson after a video surfaced of her cursing under her breath on hot mic after a parent addressed the board.

“We are vocal because we are our children’s biggest advocates,” Roupoli said to applause. “That was very rude of you to say parents are selfish,” she directed at Fayette, who disputes the characterization of his comments.

The podium microphone turned off and Davidson banged the gavel, telling Roupoli her time was up. Davidson is then heard muttering, “F*** you.”

The expletive was audible to people watching the livestream of the meeting but was not heard at the in-person meeting.

Controversy erupted later that night when video clips were shared online, including by proponents of an effort to recall Fayette and two other board trustees. Davidson is up for re-election in 2022 and not part of the recall.

Recall supporters also circulated a second video clip in which Davidson appears to utter, “Oh my God, here we go,” before another parent spoke at last Tuesday’s meeting.

“It’s sad that it took a hot mic to see … to catch her real feelings and to see what these school boards are really thinking about us parents,” Roupoli told AM870 The Answer, one of many conservative media outlets she and the pro-recall campaign spokesperson have appeared on in the past week.

“She (Davidson) should resign,” said Roupoli, noting that such conduct is disrespectful by an elected official.

Since the meeting, Davidson has issued an apology and attempted to call Roupoli personally to apologize. Roupoli has acknowledged speaking to Supt. Andrew Pulver since the incident, but said she was advised by an attorney not to speak to Davidson.

“My love is for the kids and the community,” said Davidson. “I should not have said it and I must do better,” she added.

“I could make excuses,” said Davidson, “but none of that really matters, because it doesn’t take one little bit of accountability off me.” “Trust is built through actions over time. I know I have broken trust with many of you.  For that, I am deeply sorry.”

“Ms. Roupoli demands her resignation, not an empty apology,” reads a letter signed by recall organizer Donna McGuire, parents Staci Muller and Matthew Simmons and former board trustee Dr. Jeff Barke, who lost his seat in 2018 when Davidson won.

“Anything else is a tacit approval that a board member can verbally assault parents at school board meetings with no repercussions. We demand better,” they say in an Guest Essay published in this week’s Event News Enterprise and posted on this website.

Davidson said she will remain as Board President. “I have no plans to resign.”

Ladelle “Del” Clark, who has served on both the Orange County Board of Education and the Los Alamitos Unified School District board, says Davidson should “absolutely not resign.”

Clark said for the recall group to call for the board president’s resignation is “hypocrisy at its greatest.” The former education official said the anti-mandate protesters shared the sidewalk with a kiosk selling T-Shirts that represented profanities such as FJB (F**K Joe Biden) and similar slogans. Organizers acknowledge the vendor but say they maintain no association with them.

Board Members Speak Out

In an interview last week, Vice President Diana Hill said she does not condone Davidson’s behavior and called it “not acceptable.” But Hill is advising forgiveness at this stage.

“I know Mrs. Davidson made a regrettable mistake and I know that she is extremely sorry. I believe that we all make mistakes and we’re all due the grace of forgiveness,” Hill said.

Hill lamented the circumstances but said she doesn’t think Davidson should resign. “From what I have seen of [Davidson] as a governing board member, she has always cared about parents and students and staff. This was a moment that came out of a lot of frustration.”

Roupoli was addressing Fayette during her comments and he said that has factored into his reaction to the incident.

“I feel responsible because [Davidson] was expressing frustration for how I was being treated,” Fayette said. He said Roupoli mischaracterized his earlier comments by suggesting he said parents were selfish.

He said he was referring to recall supporters, not parents concerned about the vaccine mandate when he said: “We’re coming out of a once-in-a-lifetime pandemic and instead of pulling together and putting the children first, there’s a group of people that are putting themselves first.” The comment elicited rumblings of disapproval from the audience at the meeting.

Fayette said that the board has been under intense pressure for roughly the last two years. Pandemic safety protocols, an ethnic studies elective and social justice standards have become hot-button topics at board meetings with public speakers consistently criticizing board members. At least two meetings were switched to virtual for safety reasons as they drew larger, more vocal crowds as law enforcement authorities said internet chatter created the potential of a clash between opposing activists.

“I would hope that many people would have grace and compassion,” Fayette said of their reaction to Davidson. “Everyone has a breaking point.”

Editor’s Note: This story has been edited to specify the goods being sold at the kiosk and clarify its relationship with the protest organizers. 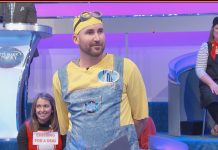 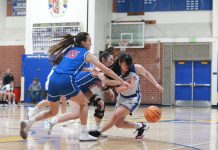