ion member Jo Shade is revving up the engines and getting ready for this year’s upcoming Senior Parade through Rossmoor.

What began as a necessity during the depths of the pandemic is quickly becoming a celebrated community event and the 2022 parade is no exception. “It’s going to be super fun,” said Shade.

She said registration begins May 16th and “we’re doing things a little different this year.” First, she said, since most people are back to work, the event will be held on a weekend rather than a weekday. Also, she said there will be a ‘grand marshal’ of sorts in the parade, this year honoring longtime Rossmoor resident Georglyn Seligman. She said Georglyn “was our first RHA member, joining the association 65 years ago” and has dedicated herself to Rossmoor ever since.

Shade said the Los Alamitos High School award-winning drumline has agreed to be part of the parade this year. “It’s going to be so exciting,” she said.
To register, visit ourrossmoor.com/parade2022 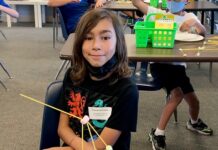