California health officials have revised COVID-19 guidelines for K-12 schools by reducing the distance students can safely sit near one another in classrooms when other safety measures, like proper face mask use, are in place.

The move could allow for more students inside classrooms meaning more campuses could offer full-time in-person instruction, including possibly at schools in the Los Alamitos Unified School District.

California’s shift to 3-feet follows a similar relaxation released Friday by the Centers for Disease Control and Prevention.

CDPH writes that schools “maximize space between seating and desks” and “distance teacher and other staff desks at least 6 feet away from student and other staff desks.” It also recommends 6 feet of distancing should be done as much as possible when students or staff are not masked, such as when they are eating.

The new CDPH guidance also emphasizes the importance of layering safety mitigation strategies at schools to limit the spread of coronavirus. The top four measures CDPH lists are: face coverings for students and staff, keeping students in stable groups that don’t mix with other groups, physical distancing and adequate ventilation.

“I’m very excited about the change in the guidance,” said Los Alamitos Unified School District Superintendent Dr. Andrew Pulver in a phone interview on Monday. LAUSD has nine schools across Seal Beach, Los Alamitos and Rossmoor and all have been open for hybrid in-person instruction since September 2020.

Right now, about 76% of LAUSD’s students are in hybrid learning, where smaller groups are on campus for in-person instruction at least two hours a day most days a week. Other students are enrolled in the all-virtual program, LosAl@Home.

Last month, Dr. Pulver sent a message to families saying the 4-foot minimum had put the district in a “holding pattern” delaying a transition to full-time in-person instruction.

On Monday, Dr. Pulver said that the district was still “unpacking” the revised 3-foot spacing guidance and was going to work with staff on how to proceed.

“Our goal is to see how we can use this updated guidance to offer more in-person learning opportunities,” he said.

That may be more feasible at the district’s six elementary schools which have smaller class sizes than the two middle schools and Los Alamitos High School. Traditionally kindergarten through 3rd grade classes have a maximum of 24 students. The higher-grade levels traditionally have 32 students to a classroom.

LAHS teacher Drew Sells said his biology classes have had as many as 36 students during non-COVID times. Currently his classroom has twenty desks, including his own.

Sells has been actively working to improve ventilation in classrooms at the high school. On Monday, he said that with the new 3-foot student spacing, air flow becomes even more important.

“It is crucial we have definitive guidance as to what is meant by ‘adequate ventilation.’ Many rooms at the high school don’t have the luxury of opening doors or windows due to construction noise,” Sells wrote in a text message. (The LAHS campus is undergoing major renovations funded by a bond measure.)

According to CDPH, schools should follow the American Society of Heating, Refrigerating, and Air-Conditioning Engineers guidance on ventilation.

Dr. Pulver said he would likely touch on the new 3-foot guidance during his Superintendent’s update at the LAUSD Board of Education meeting on Tuesday evening. (The meeting took place after the Event-News Enterprise went to press.)

In related news, Dr. Pulver shared that a recent survey of more than 600 LAUSD employees showed 70% of those surveyed said they had received at least one dose of the COVID-19 vaccine. He said the survey was done at the request of Orange County health officials working to get school employees vaccinated. 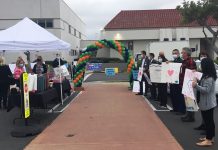 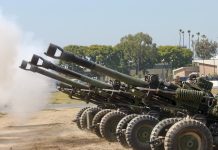