petition on change.org seeking to postpone a decision on the Cypress School District’s agenda for Thursday that they claim would forever alter a school schedule that has been in place for the past three decades.

According to Brittney Cook, PTA President of Margaret Landell Elementary School, the Cypress School Board of Trustees have scheduled a vote for Feb. 11 regarding next year’s academic calendar that would end, once and for all, the year-round scheduling that has become the school’s hallmark.

For almost three decades, she said Landell Elementary has held so-called “year-round” classes, which means they take a month off in three intervals, rather than taking the traditional summer off.

Cook said the board asked the school to forego year-round schooling this year because of COVID, and although “we didn’t love it, but we said okay.”
Now, she said, the Board of Trustees apparently is preparing to vote on an academic calendar for next year that omits the year-round scheduling for Landell and makes all of the schools operate in a traditional schooling model.

Cook said Landell was opened in 1993 because parents wanted “an alternative schedule.”
As of Tuesday, more than 300 presumed parents had signed the change.org petition. According to the petition, “Margaret Landell Elementary School has always been a school of choice. For 28 years, our school has thrived off our year-round academic calendar. Year-round teachers have seen smaller gaps in learning when compared to traditional school schedules,” it said.

Further, the petition claims that The University of Texas Arlington found that year-round schools also, “prevent student and teacher burnout” and, “[increase] opportunities for extra help and studying.” We are immensely proud of our students’ successes.
“Although there are no certainties with COVID, it seems as though the district is making hast[y] decisions that will further disrupt our path back to normalcy and provoke even more change to our community,” the petition claims.

“The Cypress Elementary School Board is duty-bound to do the difficult work of determining how to keep our schools open safely during a pandemic. This diligent work must be considered with community and stakeholder input; without it, decisions will hurt the performance of educators and students. It’s up to all of us to hold them accountable,” claims the petition.

However, according to Ann Silavs, Cypress School District Superintendent, more than 72 percent of Landell parents that were surveyed did approve another year of traditional scheduling for Landell.

“Our primary goal is to keep schools open for in-person instruction,” said Silavs, and the district is committed to doing whatever is necessary to “help us in that endeavor.”
Silavs indicated while the parent survey was predicated on just another single year of scheduling changes to accommodate COVID, the district must leave open all possibilities.

“It’s not our intention to permanently change,” said Silavs, but “this (coronavirus) is a fluid situation. “There is hope on the horizon with the vaccines,” she said, “and we hope to get back to normal as soon as we can.”

Nevertheless, with COVID variants also on the rise, Silavs said no one can be sure when normalcy could resume.

Until then, she said, the district wants flexibility to accommodate students. Silavs said the Cypress School District is one of only a handful of systems offering elementary students three distinct options, including traditional, in-person instruction, hybrid-learning and distance learning only.

With all schools offering a consistent calendar, however, students can be “blended across six schools (to accommodate the three options). We want it to be as seamless as possible” for students and parents, she added.

Silavs said she understands the concerns of Landell parents and teachers, but because of the current emergency, “we have to place the needs of our families first.”
The petition is asking for three things:
• A pause on making the decision until June (why are we making a decision NOW when COVID guidelines are ever-changing and there may not be a need for a modified schedule 6 months from now?)
• Multiple calendar options/proposals be made available (parents were asked to vote on a schedule preference without any actual proposed schedules. the district should present a minimum of 2 -traditional and year-round, preferably 3 – including a compromise option, like the one that was submitted to the district by teachers and ignored- for parents and teachers to review and provide feedback on).
• Additional parent outreach and survey with at least 60% participation (a survey with a clear understanding that a decision will be made based on the feedback, with clear options and proposals).

The next meeting of the Cypress School District is Thursday and will be available for virtual attendance by the public. 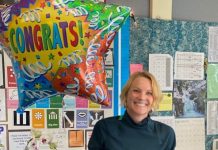 Cory Alfaro, District Teacher of the Year, brings kindness to her classroom