Oxford Academy Girls Basketball team participated in the Orange High School Panther Classic last week and walked away with another championship trophy. The tournament featured some of the better teams in North Orange County, but the tough competition didn’t the Lady Patriots as they marched through the tournament with convincing victories over Foothill (53-33), Sunny Hills (51-45), Samueli (59-8), and Canyon (63-33) in the championship game.

Tournament Top Performers over the 4-games:

Oxford’s overall record improves to 10-0 and the Lady Patriots are proving to be one of the top teams in Orange County. The next test for the girls will be when they take on Katella at Oxford on Dec. 11 at 6 p.m. and travel up the street to play Kennedy at 7 p.m. on Dec 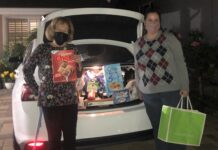