According to BloodHorse.com, a top horse racing website, the California Horse Racing Board tabled a vote to approve the license of Los Alamitos Race Course until its meeting next month, pending the receipt of the track’s written plan to reduce the number of racehorses receiving corticosteroid intra-articular joint injections there.

The move is reportedly necessary because CHRB officials believe those injections have contributed to a spike in fatalities at the local horse racing track.

The site said Executive director Scott Chaney told commissioners during its most recent teleconference meeting that evaluations of fatalities at Los Alamitos showed that horses there had been injected on average three times over their lifetimes. By comparison, that figure was a 0.6 average for racehorse fatalities at Del Mar, Santa Anita Park, and Golden Gate Fields, according to Chaney.

“About five times the number of injections seem to be present over there,” Chaney said. “There’s always been this kind of rumor that there’s a cultural issue with respect to trainers and vets and how things operated. So, the numbers seem to bear that out that (intra-articular joint) injections are more of an issue than it is (elsewhere),” the site quoted the official as saying.

Chaney and CHRB chair Dr. Greg Ferraro indicated to the board that in discussions over the past week, the CHRB received a positive response from Los Alamitos owner Dr. Ed Allred to implement stricter protocols related to injections, the report said.

This follows a summer agreement between Los Alamitos and the CHRB in which the track was required to submit enhanced safety protocols after 21 horses had died from racing or training through July 20, nearly half of which had come over a period from late May through mid-July.

Since the summer protocols were put in place, six on-track racehorse fatalities have occurred at Los Alamitos, specifically during racing, according to CHRB online records.
“We’re very appreciative of the help that we’ve been given by Dr. Ferraro in coming to this understanding, and we’ve pledged to do all we can,” Allred said. “In addition to that, we’re addressing some of the other security problems at the track. We’ve hired two of the retired investigators of the CHRB, and we’re putting in cameras in many of the stalls. And we’re hopeful that this will correct any problems we have in that way. We’ll present the full agreement at the next meeting,” the report continued.

“I might add that pursuant to their agreement, pursuant to the desires of the board, we’d like to have all rules regarding health and welfare of horses standard throughout all our tracks in California,” he said. “So, consequently, we will not only require that Los Alamitos, as part of their license to operate, have this rule, but we will extend it to all tracks.” Therefore, Santa Anita and Del Mar will also be required to put a rule in place for a 30-day stand-down for intra-articular steroids, the commissioners were told. 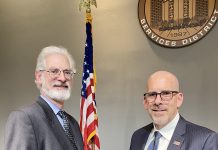