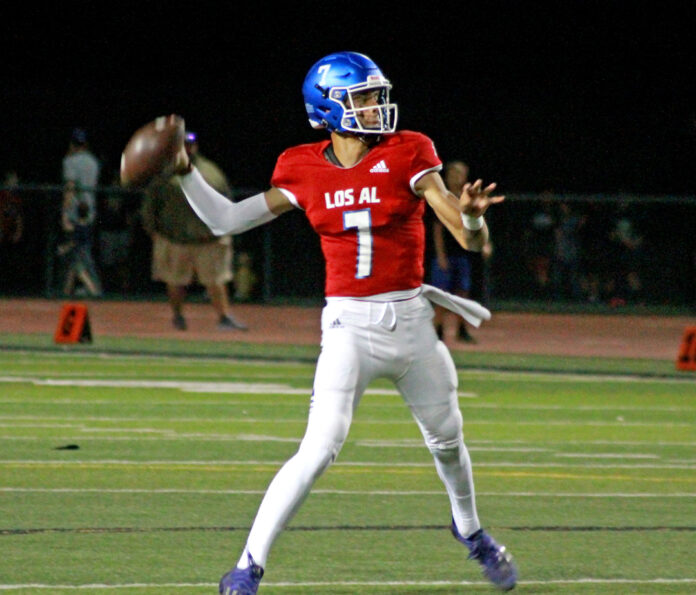 Los Alamitos High’s football team held off Edison 35-28 to grab the inside track to the Sunset League Championship on Thursday at Westminster High.

Quarterback Malachi Nelson threw for 194 yards and three touchdowns as the Griffins led by as much as 35-14. But the Chargers rallied for two late touchdowns to cut the lead to 35-28 before the Griffins recovered an on-side kick attempt and ran out the clock.

The Griffin defense had some key early stops, including an interception and a goal-line stand in the first half to get the early lead. Nygel Osborne rushed for 122 yards on nine carries to help pace the Griffin offense.

Tustin High rallied for 20 points in the fourth quarter, but it wasn’t enough to overtake Cypress, as the Centurions held on for a 35-27 Empire League victory over the Tillers on Friday at Tustin High.

The Centurions have another tough Empire League game as they will play Pacifica High (6-1) at Bolsa Grande High at 7 p.m. on Friday. Pacifica lost to Tustin in their league opener, but bounced back with a 45-42 win over Valencia last week.

Kennedy High held off Crean Lutheran with a 21-17 Empire League win on Friday. The Fighting Irish improved to 4-2 overall and are 1-1 in league play.

The Fighting Irish will host Tustin at 7 p.m. on Friday at Western High.