Marlene Wagoner and her four ‘girls’ are finally back to living the good life on Cherry Street in Los Alamitos.

From a perch atop their well-appointed townhouse coupe, the girls are clucking a sigh of relief after the city has finally given them a new lease on life.

Three months ago, Wagoner’s chickens, Henrietta, Harriett, Olive, and Dixie Chick, faced what seemed to them like an eggsistential crisis.

Seriously, said Wagoner, they were mad as hens. Dixie Chick was so mad she was about to eggsplode, she said. They had never seen such ruffled feathers.

Their idyllic lives in the backyard of the Wagoner’s residence could be coming to an end. Apparently, a neighbor cried fowl, and the birds were suddenly clucking with worry.
According to Ron Noda, the city’s acting deputy city manager, the chicken odyssey began in February when an unnamed resident filed a complaint against the chicks. “I think it was a noise issue,” said Noda.

“I had no idea what to do,” said Wagoner, an educational administrator, at the time. Apparently, she learned, there was no provision in the city’s code of ordinances to support live fowl living in the city. Wagoner jumped into action, having only two choices.

Change the law or say goodbye to the girls. Wagoner put her paperwork in a henvelope and prepared for the hearing. It did not start well.

“No person shall have, keep, maintain or have in possession or under control any live fowl in the city,” said the city’s ordinance. “Live fowl means, and includes male and female chicken, duck, goose, seafowl, peacock, turkey or pheasant.” Yikes, pretty bleak.

Wagoner, attending the meeting via Zoom, protested, saying her four girls deserved an eggsemption in the law.

As the debate wore on, the chicks’ fortunes began to change. Associate Planner Tom Oliver sudd-hen-ly seemed to side with Wagoner and her girls.

DeBolt said he saw nothing wrong with the ordinances the way they were but was open to a discussion. He said his own experience was that when he once had neighbors with chickens decades ago, “the only thing I remember is the flies. We had a lot of flies,” he said.

“Do we really want a carve-out for chickens,” asked DeBolt, “no pun intended?”
Then came an uneggspected surge for the girls from commissioners.

“We probably have more chickens than we know about,” said Commissioner Larry Andrade, noting that “I get flies too.” Even dogs and cats can attract flies if not kept clean, he said.

Now those hens began to some real eggscitement. Too early to crow about it though.
Commissioner Wendy Grose said her niece lives on a farm with chickens. “My niece has a farm out of state and watching her take care of her chickens [it] seems healthy,” she said.
Grose said it absolutely depends on the coupe, built in a special way, but given the proper housing, she could support it.

Lee, Marlene’s husband, has southern lineage from a long line of Arkansas chicken farmers, he said.

During the pandemic, when things were lonely, he and Marlene decided to get the four girls.

Marlene said Lee built “an amazing coupe” for the girls, complete with an upper and lower floor, and they clean it every day. Lee loves those little peckers too, she said, even giving “Dixie Chick” her name. But their future was in doubt.

“If we limit the number [of chickens] they can have,” said Commissioner Mary Ann Cuilty, “I don’t think they would be smelly or loud.” Having “polled a few friends,” said Cuilty, she too could support a limited exemption.

“If we can figure it out without being a nuisance to neighbors, considering the smell and noise,” Commissioner John Reilly said, then the chickens could count on his vote as well. Commissioner Gary Loe voiced a similar sentiment.

For the chicks, this kind of talk was poultry in motion and Marlene went on the offensive.
Wagoner said chickens are “odorless pets, with no smell, we never had flies, and every bit of the waste is sealed in steel canisters.”

She suggested to the commission that compost piles from the local military base and dog poop attract way more flies than her girls. After all, the four girls have special cages and a duplex chicken coop.

“They don’t make a peep all night,” she said. “They are really sweet.”
As part of the coop townhouse, Lee built four special nesting boxes, she said, all locked, where the chickens “make polite announcements” every time they lay an egg. Wagoner said when they hear those announcements, they quietly retrieve the eggs, often sharing them with neighbors.

While most live fowl regulations call for three to five feet for each chicken, her chickens have 14 square feet each in the coop condo Lee built for them. “We believe in free-range,” she said.

At the hearing, Wagoner said most of her neighbors support her and that, if need be, she could likely fill the Council Chambers with supporters. She said an unnamed neighbor’s “yappy dog” and “loud music” were much greater threats to the neighborhood’s serenity than her four girls.

After a discussion, the Planning Commission agreed that any such chicken enclosures would have to be located at least 20 feet from any dwelling. They included other legal measures that would provide the city with some mechanisms for code enforcement to ensure compliance.

“Farmer John is now Farmer Ron,” said Council member Mark Chirco, referring to Ron Noda, who had shepherded the process. Chirco explained that the city had modeled the new ordinance after one in Sacramento, allowing four hens but no roosters. There will be no cock-a-doodle-doo in this town.

Chirco said his family had chickens growing up and thanked Wagoner for bringing the issue to the planning commission and ultimately, the Council. Her argument was impeckable, he said.

“She did a great job egging them on,” said Chirco, also praising the Planning Commission for showing plenty of “hendurance.”

“You know, they really evaluated it,” he said, and their talk is not cheep.” he said. Don’t’ pay attention to all the bad talk about chicks, said Chirco, “is not what it is cracked up to be.”

Mayor Shelley Hasselbrink also thanked “Farmer Ron,” and asked for a motion and a second. After a few more clarifications, the Council at its meeting in May voted unanimously to approve the new ordinance.

Marlene said the girls were so eggscited to find out that finally, they were safe in the city, and oh my, what a relief it was.

During a visit to her home, and the townhouse coop, Wagoner said “it would have been super sad to get rid of the girls. The four girls are part of the family,” she said.

“If my husband came out right now, they’d probably run up to him,” said Wagoner. Like other domesticated animals, they check visitors out. “They are very, very, very friendly animals,” she said.

Although her three boys are all grown up now, Wagoner said “I wish we would have done this when they were young. We decided to get them during COVID-19, when we were locked down,” she said.

Her husband Lee is an Arkansas native and getting the four birds was almost like being back home. “Lee comes from a family of chicken farmers,” said Marlene.

Lee said while he’s no eggspert, his experiences with chickens growing up taught him they make “lovely pets.”

In fact, Marlene goes a step further, saying the four girls are “therapeutic, friendly and beneficial in many ways.”

With the threat removed, life is finally back to normal at the Wagoner household. The four girls on Cherry Street are enjoying life again. Even creating their own backyard chick flicks.

Now that these feathere fowl are famous, they have promised Marlene and Lee to always be a good eggsample for others.

And they are back to having fun. At a peck-nic the other day, Marlene said she overheard Henrietta, the quiet chick, ask Olive, ‘why did the cactus cross the road?’ “I don’t know,” said Olive, “because it was stuck to the chicken,” bellowed Henrietta.

Such comedi-hens, those girls. Even Dixie Chick had to chuckle.

Wagoner said the girls are now very happy and so is her family. “We’re eggstatic,” she said. It may not be eggsactly like life down on the farm, but for sure, it’s the next best thing. 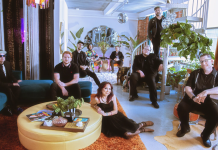