Home Education OCBE withdraws request for Rush Park rental in Rossmoor
Facebook
Twitter
Google+
Pinterest
WhatsApp
Breaking:
The Orange County Board of Education has withdrawn its request to hold one or more “educational forums” on Critical Race Theory in the community of Rossmoor, the Event News Enterprise has confirmed.
The Orange County Board of Education voted 5-0 at their July 7 meeting to withdraw its rental request and instead, voted to hold both of the planned meetings at their existing facility in Costa Mesa.
The board had earlier filed an application to rent the RCSD Rush Park auditorium for the CRT educational forums, one on July 27, and the other, potentially on August 24.
Former President Ken Williams, Jr., told the OCBE that the June 22 special meeting held by the Rossmoor Community Services District (to discuss the OCBE rental application) had been “a very contentious meeting.”
“It is quite obvious that there is a good percentage of people locally who didn’t want potentially confrontational groups in their community,” Williams told the OCBE.
Accordingly, he said potential security estimates at both Rossmoor, and Yorba Linda (another potential site), were “cost prohibitive” for OCBE. Williams said neither site turns out to be “workable” for OCBE.
Instead, Williams then recommended the OCBE host both the July 27 and August 4 CRT forums at the OCBE facilities in Costa Mesa. Even though the facility can only accommodate approximately 150 people, Williams asked the staff about setting up a tent outside with live streaming and audio facilities for overflow.
Nina Boyd, Associate Superintendent for the Orange County Department of Education, said cost estimates provided for security at Rush Park were perhaps “overstated,” but she noted because of nearby freeways and the potential cost of calling in reinforcements, the estimate could have indeed been quite expensive.
Boyd leads OCDE’s Governance, Leadership and Community Partnerships division and serves as liaison to the Orange County Board of Education.
While OCBE has arranged such tents for outside facilities in the past, said Boyd, recent discussions with local police indicate they cannot utilize the same spaces, citing additional security concerns.
“The climate has changed in America,” she told the OCBE.
Nevertheless, the board unanimously agreed to change the venue to Costa Mesa and work on provisions to accommodate up 300 people expected to attend two educational forums on Critical Race Theory.
Meanwhile, Rossmoor Community Services District General Manager Joe Mendoza has confirmed that OCBE has, as of Thursday morning, officially withdrawn its Rush Park rental request.
At the OCBE’s most recent meeting Wednesday, Mari Barke, of Rossmoor, was elected President of the Board for the next year.
See more details and reaction in the Event News Enterprise next week.
Courtesy photo
Rossmoor resident Mari Barke is now President of the Orange County Board of Education. 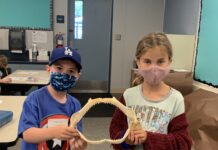