It’s not everyday that Broadway comes to Seal Beach.

Yet, with little fanfare and a big voice, 12-year-old Jenna Currey stepped onto her family’s 15th Street balcony this past Sunday with only a dream and the courage to chase it.

So devastated when the pandemic began, she has used the slowdown to learn a few lessons about music, and life. And on Sunday, Jenna shared the stage with one of Broadway’s brightest stars.

“I have so many people to thank for this,” said Jenna as she proudly introduced Sarah Uriarte Berry, a talented actress and singer who has earned praise for her many roles on Broadway. Berry, who played the role of Belle in Beauty and the Beast and Eponine in Les Misérables, among others, is now Jenna’s vocal coach.

Neighbors slowly began gathering in the street below the balcony, many not yet realizing that Sarah would have a special guest for her normal Sunday Serenade.

What led to this extraordinary event was Jenna’s driving ambition since kindergarten of having a career in musical theatre. In 2018, Jenna sang “I Saw Mommy Kissing Santa Claus” at the Seal Beach Christmas Tree Lighting Ceremony.

Now a 7th grader at Oak Middle School, Jenna had played “Annie” with the local My Art Repertoire Theatre group when the pandemic locked everything down.
Ambition, however, is impossible to silence.

“Jenna is a musical theater kid who has been doing theater since she was in Kindergarten,” according to her mom, Michelle Currey. Several months ago, Jenna noticed others, including her vocal coach, were finding ways to perform during the pandemic, said Mrs. Currey.

“So, she asked us if she could do it in Seal Beach,” her mom said. “Well, I told her, since your dad is sort of in that business, we have the equipment,” and “that was that.” Her dad, John-David Currey, is a principal at Fresh Cut Creative, a local company that edits network trailers, so audio equipment was not a problem.

With dad handling the audio equipment, mom doing the organizing and son Ben sometimes acting as master of ceremonies, the Curreys began a “Sunday Serenade” back in late 2020 to entertain friends and neighbors.

“We never advertise because we require masks and wanted to be safe,” Mrs. Currey said, but Jenna decided to give a 4-song musical theatre performance every Sunday at 5 p.m. since.

Her ‘Sunday Serenades’ has not only earned Jenna some new Seal Beach fans, but the experience has also taught her much about life as well as music, according to her parents.

It has taught them lessons as well, they said.

Over the past few months, Jenna’s mom and dad say they have met neighbors they never knew. “Jenna is bringing joy to people,” said Mrs. Currey. “We’re getting to know our neighbors,” she said, “new people each week.”

But this Sunday was special.

Jenna’s dad John-David likened it to “when you were a kid and wrote to Michael Jordan asking him ‘can you come to my birthday party’ and he never wrote back.” He said his daughter asked Sarah Berry to come “and she said yes.”

Berry and her husband Michael, also a Broadway star and now a director, live in Long Beach after moving from New York. Berry’s children attend McGaugh and Los Al High School. Berry has enjoyed multiple starring roles on Broadway, and most recently in

Before her opening song, Berry gave a heartfelt tribute to her California grandparents, and parents, all immigrants from Cuba and Spain, saying her grandfather, a talented machinist in his home country, was willing to shepherd sheep to plant his family in America.

She spoke highly of Jenna, acknowledging that the young singer was strong willed, always wanting to move forward while Berry wanted to slow things down to solidify the fundamentals.

“I was trying to train her to sing and work on old-fashioned songs that I called vegetable songs, and she wanted to sing desert songs like Lady Gaga,” said Berry.

Jenna smiled as Berry spoke, then it was her turn. “At first I didn’t know,” said Jenna, “but she (Berry) has helped me in everything I do…and I sing a lot.”

When the music started, even the dogs were quiet as Berry opened the show with a belted torch blockbuster song entitled “My Man,” written a hundred years ago but made hugely famous by Barbara Streisand in “Funny Girl.”

With the sun setting over the ocean a few blocks away, Berry’s powerful voice soon filled the air around 15th Street as neighbors looked on and listened intently.
She switched to “soprano” for the next tune, performing “If I Loved You,” a song Berry sang on tour with Rodgers and Hammerstein’s Carousel.

Then it was Jenna’s turn to shine. Berry walked to the side of the balcony, leaving Jeanna alone, standing only with a microphone and a hard act to follow. It was a special moment in Mayberry by the Sea.

“I’m going to sing ‘Where is Love’ from Oliver because it is Valentine’s Day,” said Jenna, before looking down, obviously reflective and poised for her dad to cue the music.

First came the music, followed in time by notes so smooth they seemed to float on the gentle ocean breeze. “Wheeeereee is love,” she sang, and from the first note until the last, Jenna belted a tune that left the neighborly audience, and even her vocal coach, astounded.

Amid whistles, hoops, and hollers from the small, yet vocal gathered assembly, even Berry commented on Jenna’s performance, comparing her last few notes to something she had seen once in the Royal Shakespeare theatre.

“It’s so cool what she just did,” said Berry. “Very slow, so much breath control to hold those notes so long and in tune.” Berry said many adults “would be afraid” to attempt what Jenna had done.

Finally, Jenna and Sarah performed a Judy Garland, Liza Minnelli, mother/daughter-type duet entitled “Together, Wherever We Go” as the Valentine’s Day pop-up concert came to an end.

Mom, dad, brother and Scooter, the family dog, seemed to be so proud to see Jenna maturing into a performer, holding her own side-by-side with Broadway’s own Sarah Uriarte Berry.

John-David says the entire experience has been a valuable “life lesson” for Jenna. While Jenna remains inspired to end up on the stage, “she’s learned to give to others,” he said, while there were lessons for the parents too.

Linda King, who lives on Electric Ave., acknowledged she had attended previous “Sunday Serenades” after neighbors “had let me know.”

“My first thought was how nice to be so young with an exquisite voice. She’s one in a million,” said King,

“It was really special,” said Ellie Clarke. “It’s not every day you can walk down the street and see a Broadway show and such young talent.”

King also said she thought Sarah Uriarte Berry had an extraordinarily “gifted voice,” and could help a young musical performer like Jenna go a very long way in the business.

“With this Broadway star guiding her, and with a supportive family,” said King, “with her beautiful voice, Jenna will go as far as she wants to go in life.”

Broadway had indeed come to town, showcasing one star while inspiring another in the making. 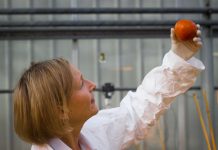 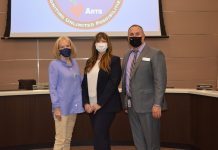 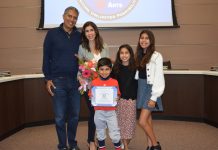