More than 800 vehicles carrying hundreds of graduates from the Los Alamitos High School rolled through the streets of Rossmoor Saturday morning as the 3rd annual RHA Senior Parade paid homage to this year’s graduating class of 2022.

According to the Los Alamitos Unified School District, the high school’s Class of 2022 includes 766 graduating seniors and five juniors who are early graduates. 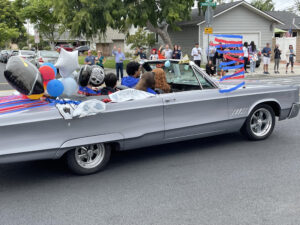 Now in its third year, seniors and their families have become very crafty about signage, with many of this year’s entries including not only the names of the graduating seniors, but also what college they are attending and the college mascot.

Shade is an official with the Rossmoor Homeowners Association who founded the parade three years ago and organized it again this year. “I just want to say, ‘have fun, enjoy the parade.’ Drive safely. Please watch the car in front of you on speed,” she added.

A large group of elected and administrative officials gathered to send off many of this year’s grads in ebullient fashion.

“Good morning, Griffin class of 2020,” said a jubilant Los Alamitos Unified Superintendent Dr. Andrew Pulver. “I hope that you feel this community just stretching its arms out to all of you and giving you a huge hug,” he said.

“There are no finer communities to raise kids and to thrive in than here in Los Alamitos Seal Beach and Rossmoor,” said Pulver.

He thanked the Rossmoor Homeowners Association for not only making this year’s parade happen, but also for bringing joy to seniors during the pandemic by originating the idea.

“The RHA brought this senior parade in the one of our darkest times during the pandemic and they shed so much light on it that today, it is a new tradition,” he added.
We are so excited to have you here and just a huge thanks to the RHA for putting this on for our whole community and being so inclusive of all our graduates,” said LAUSD Board President Diana Hill.

“This is an incredible showing,” said Los Al High School Principal Christiana Kraus looking over the stage at the rows and rows of cars waiting to pull out into parade formation. 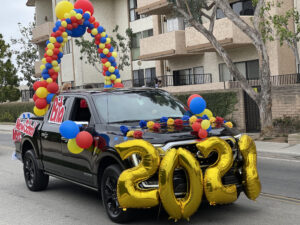 “It’s no surprise,” said Kraus “because that this is the way Los Al is. I’m excited to celebrate with you, the Class of 2022. You’re amazing. You’re so kind, so talented, so brilliant. And have incredible hearts and we know that you’re off to do even greater things. Congratulations Griffins,” the principal said.

“The sky’s the limit,” Assemblywoman Janet Nguyen advised the grads.

“Hey, class of 2022,” said Los Al Mayor Shelley Hasselbrink. “I want to congratulate you. Just enjoy the summer and enjoy your next season. Just buckle up and enjoy the ride,” she said.

Los Al Police Chief Michael Claborn was reflective in his message to seniors.
“As I sit and think about all the things that you all have had to endure over the last four years,” said Claborn, “I can assure you that you have been battle tested more than any graduating class has been that has come before you,” he said. 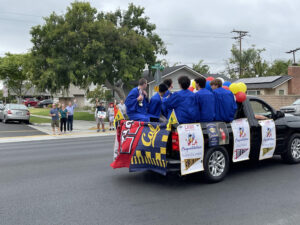 “So, whatever the world has to throw in front of you. I’m sure you’ll be able to handle it. Congratulations, it’s an exciting time to close one chapter and open your next, good luck.”

Students too, were reflective and mindful of what they had endured as they now move on.

“It’s exciting. It’s been like different,” said Abby Depina. “Because like COVID you know, it, kind of like changed all like the rituals, but it’s been fun. Our school [LAHS] has done a good job of like making everything feel back to normal,” she said.

Kaylin Hurley said “I think this year has been super exciting. It was great getting to have a normal year.” Hurley said “we just made the most of it after going through so much and it was so much fun.”

“I think we’re the first year to get the full experience [of a senior year],” said Peyton Nelson. 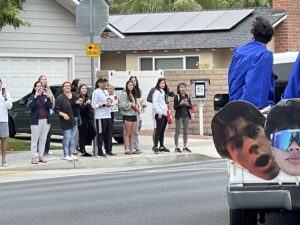 Zack Sutherland is one of the few graduates from around the nation selected to the attend the United States Naval Academy. The Los Al graduate will enroll in Annapolis and said he hoped to become a cyber systems specialist in the next four years. 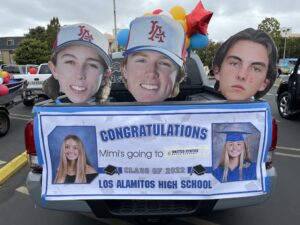 “That’s what I want,” said Sutherland, “but honestly, wherever the U.S. Navy wants me, we’ll have plenty time to figure it out in the next four years.”