Photos by Andrew Ficke
Well, McAuliffe Middle School’s Principal, Dr. Ryan Weiss-Wright has proven he will keep his promises. After students and their families exceeded a fundraising goal of $35,000 (in the school’s overall quest to raise $75,000 to support associated campus activities), the principal indeed kissed a pig. At first, Weiss-Wright stared down the 65-pound pig named “Piglet,” before gently kneeling close and kissing it. Some students watched intently near 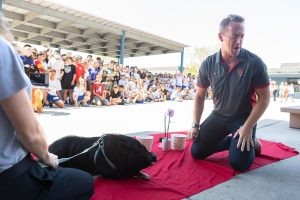 the scene while the entire school watched via livestream. For the good-natured principal, it’s been a rough go in 2022, as Weiss-Wright has reportedly been hit in the face with a pie, dressed up as the Pillsbury Doughboy and danced with the school choir as the fundraising effort hit certain milestones. The campaign is now within a pig’s hair of reaching its ultimate goal so heaven only knows what happens when they inevitably reach it?