Los Alamitos Mayor Mark Chirco told members of the Los Alamitos Chamber Thursday that dedication and creativity by staff has kept city hall open, an innovating, during the entire pandemic.

“They done an excellent job in keeping the city going,” said Chirco in an address to Chamber members. One of the city’s greatest benefits, said Chirco, is that the staff is made up of “people trying to do the right thing for the city,” adding that they endured throughout the pandemic with “no drama.”

“The past year has been difficult for everyone,” he said, and “for businesses there has been no exception.”

He said staff had endured “very real health risks, government shutdowns and new regulations,” yet were always “readily available” to help.
“The city has had no shutdowns,” said Chirco. In fact, he said the staff has created a virtual city hall and said the city’s Recreation Department has been super creative in creating sold out virtual events.

The mayor also said they are now coordinating with Orange County authorities to get the city open as soon as possible under all CDC, CPHD health regulations and is working with them on vaccine distribution.

City Manager Chet Simmons said he visited the county’s Disney Super POD COVID-19 vaccine site, saying they can vaccinate up to 10,000 people per day. For a massive operation, Simmons said it was a complex, yet very efficient process.

Almost 700,000 people have now been vaccinated in the county, he said, and said the city is encouraging people to sign up to be vaccinated while they work to eventually get more local sites open.

Chirco cited the small business relief program and said he is working with other mayors seeking a return to indoor dining for restaurants as soon as safely possible.

Finally, he said the passage of a new sales tax will put the city back on track for fiscal sustainability, also telling the Chamber that each of the council members have taken the “Fiscal Accountability Pledge” and the city will manage accordingly.

Chamber Chairwoman Nesi Stewart asked Chirco about efforts to boost the business community in Los Alamitos, some of which has been hard hit by the pandemic.
City officials say they are open to ideas for partnering with the Chamber and local businesses. In addition, they say more economic development activities are planned.
Finally, Chirco said the city was attempting to work with nearby communities to prepare an Active Transportation Plan to make the city more walkable and bikeable.

Additional state and local grants may be available soon, they said, so they hope to be ready.

Emeline Noda, Recreation Director, presented a number of upcoming activities as did the Youth Center, Precious Life Shelter and other local organizations. 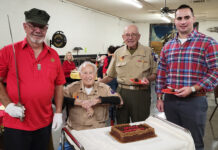