With safety precautions in place, the Los Alamitos High School Cross Country team donned their racing uniforms last weekend for their second race of the year. The Griffins hosted Newport Harbor on a brand new three-mile course at the high school that spanned dirt, grass, and paved terrain as well as the all-weather track surface. After a recent, long hiatus from team practices that lasted from mid-December to late January, the Los Alamitos student-athletes proved that they are now quickly sharpening their racing abilities. 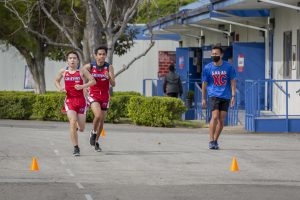 The varsity races were the first races of the morning. The boys’ top five of Tyler Austin, Zachary Nakada, Jacob Lebovitz, Vance DeBrabander, and Mitch Pelonis all ran faster times than they did the previous week. Same went for the victorious varsity girls’ top five of Hallie Muniz, Kaitlyn McQuillen, Maria Halfhill, Nicole Massoumi, and Bailey Nadell. Austin, Nakada, Lebovitz, Pelonis, McQuillen, and Nadell all had improvements of over 30 seconds! Hallie Muniz (18:30) placed first overall for the second week in a row.

The Frosh/Soph teams ran their first three-mile race of the year. In the girls’ race, sophomore Kiana Low (22:02) and freshmen Amanda Ferguson (22:08) and Eva Alvarado (22:58) all ran their season debuts in under 23 minutes for three miles. The boys’ race featured a first place finish for the second week in a row by freshman Isaac Parhami (17:37). He was followed by sophomore Danny Mastick (18:12, a personal best) and freshman Joshua Huq (19:12) as the Griffin boys placed in the first nine spots ahead of Newport Harbor.

Los Al to reach out to Rossmoor, LAUSD to create a more walkable and bike friendly community