On Mar. 2, 2021, the City of La Palma council discussed multiple items on their consent calendar. Two of these sparked major discussion amongst council members, these being the issue of public signage and the sale of safe and sane fireworks within the city.

The council first tackled the idea of revising their signage ordinance. This decision was partially motivated by the need to regulate signage in the public right of way (that is, public property in La Palma including sidewalks, curb gutter, the asphalt, etc.). Items of concern included excessive signage and damage to property like tree wells.

Another motivator was the Supreme Court ruling “Reed v. Town of Gilbert” in 2015, which required that sign regulation be neutral, regulating only time, place, location, and manner of placement instead of the exact text. The council believed it was time to examine the ordinance so that it was in line with this ruling.

Mayor Pro Tem Michele Steggell was especially vocal on this issue, stating that restrictive ordinance would hurt realtors and people looking to enter the housing market.
“Because if you say you can’t read it, or can’t put a sign here, and I have a house that I’m selling, right there on that street, that defeats the purpose of having an open house sign,” she said.

However, she did note that some regulation would be necessary.

“I am in favor of having signs. I’m not in favor of having so many signs, like the last couple of elections, especially this last one, I did not like the way our city looked,” she said.
Other council members pointed out that banning temporary signs in the public right of way would be unfair to new candidates in local elections. Given that signage is usually the cheapest and easiest way to get one’s name and policies out during election, regulation would make it harder for new candidates to compete with incumbents.

Councilmember Goodman believed that prohibiting signage in the right of way wouldn’t harm realtors or local elections, as there were other alternatives. Private property, including residence yards and businesses, would likely be exempt from any prohibitory regulation.

After a few failed motions to place regulations on signage, the council came to a compromise. A decision was made to revise the signage ordinance to allow temporary signs in the public right of way except for 10 weeks spanning September, October and the first half of November during even years. Unless the council makes further revisions to this motion, citizens can expect a prohibition on signs in the fall of 2022 and 2024.

The other item the council addressed was whether the city of La Palma should allow “safe and sane” fireworks to be sold (but not discharged) within city limits, as well as who should be allowed to sell them and where in the city they should be sold. For clarification, the safe and sane categories apply to fireworks that do not fly or explode.

The council stated that the issue was brought up by La Palma non profits, including the La Palma Christian Center/School, who wanted to set up booths to sell fireworks.

Discussion considered providing an application process where La Palma-based non profits could apply for a permit to sell fireworks, and allowing at max five organizations to have said permits. Said organizations could utilize their own parking areas to set up firework-selling booths.

However, the council cited a need to gauge public approval and speak with the police and fire departments to determine how big of an issue fireworks have been in the La Palma community. They decided to finalize the issue in April. Any possible fireworks ordinance would be announced in May, and take effect 30 days afterward in June.

Other objects of note included the council sending a letter of support for Assembly Bill 420, AB 420. This state legislation, introduced by Assemblymember Sharon Quirk-Silva and Assemblywoman Suzette Martinez-Valladares, would adjust reopening guidelines to allow large and small amusement parks to reopen in the same tier, orange (moderate). Originally, guidelines had it so that parks with capacity above 15,000 could only reopen in the yellow (minimal) tier.

The council unanimously voted to send a letter of support, citing the employment losses and damage done to the amusement park industry by heavy Covid-19 guidelines and rising vaccination rates in California. 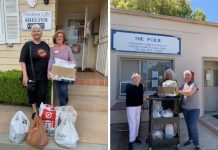