The chief negotiator for the Association for Cypress Teachers (ACT) returned from vacation this week and, in essence, echoed the optimism of the district negotiator as both sides are now saying they are hopeful an agreement can be reached soon.

“All I can say is that we’re working on it,’’ said lead teacher negotiator Elizabeth Dunagan, confirming the meeting reported by Spotlight Schools last week.
Dunagan said she was optimistic that a settlement could be reached quickly, perhaps as early as the next negotiating session.

“It was a positive interaction,” she said of their first meeting with the mediator.

“The meeting was good,” said Dunagan, “but we couldn’t finish.” Yet, she noted that “there’s a very, very good chance that we’ll have an outcome in September.”
Tim McLellan, Assistant Supt. for Business Services, said this week that he too is looking forward to a resolution of the dispute.

“I’m very optimistic that there will be a resolution,” said McLellan, the district’s lead negotiator. “I think both sides understand and want to get this behind us so we can move forward and not look back,” he said.

Further, despite the hard bargaining, McLellan said, “there is still a good feeling when we [teachers and the district] come together. The district has a good relationship with its teachers,” he said.

Negotiating teams from the teacher’s union and the Cypress School District (CSD) met at the district office in Cypress last Thursday, July 28, with mediator Jerry Adams from the California Public Employment Relations Board (PERB), said McLellan.

He said the district is mandated under state law to utilize PERB to mediate disputes when they have reached an “impasse” in negotiations. PERB is a quasi-judicial agency that oversees public sector collective bargaining in California.

The sides had met from January through May. Ultimately, the district declared an impasse after making little progress on shrinking the gap between what teachers wanted and what the district was willing to provide in terms of a new employment agreement.

Teachers, citing the 5.07 percent cost of living increase the district was awarded in last year’s budget, were asking for a 4.5 percent raise, with no “hard cap” on teacher’s benefits (meaning there would be a limit on what the district would pay for some families, after which the family would be financially responsible).

The district was willing to offer the 4.5 percent increase, McLellan maintained during the negotiations, but the district insisted on the “hard cap” on benefits, claiming CSD was only following the lead of other districts.

The district had offered teachers a proposal with no hard cap on benefits, but only with a 3 percent pay raise, said McLellan. He emphasized, however, that under both proposals, every employee’s full benefits would have been paid by the district.

The “hard caps,” he insisted, only affect teachers with larger families covered under the medical insurance.

Dunagan, however, refused to budge from the 4.5 percent pay raise with no hard caps, so the district ultimately called an “impasse,” prompting the intervention of state PERB mediators.

The two sides will meet again on Sept. 8, just a few days before school starts. Under state law, both sides must accept and abide by the final decision of the state mediator.
This is the first time since 1895, when the Cypress School District was formed, that the two sides have not been able to reach an agreement. 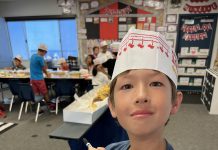