Cypress High teacher Susan Fried was an Honorary Bat Girl at the Los Angeles Angels of Anaheim game on Mother’s Day. She was also honored as a breast cancer survivor who is campaigning for the importance of regular and self-exams for early detection of cancer.

The Angels released the following statement about Susan. “Susan is a beloved friend and science teacher to so many students at Cypress High School. Her former students include the Marketing and Entertainment Coordinator, Mandi Ortiz and Angels Infielder David Fletcher.”

As a student favorite, Mrs. Fried has been teaching for 23 years and coaching women’s volleyball and basketball on campus for than a decade.

She was nominated by Mandi Ortiz. She began teaching the cancer unit in her class the day after she was diagnosed. After one day of trying to teach the unit, while holding her news in, she decided that keeping it a secret wasn’t going to do anyone any good – she decided to invite her students and community on the journey with her and provide them with the most direct lesson on the cancer unit possible.” 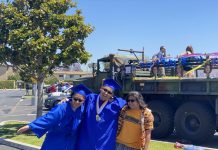