A hate flyer, entitled “Every single aspect of the Covid Agenda is Jewish,” was circulated in Cypress and other areas of the county, Mayor Paulo Morales acknowledged Monday at the Cypress City Council meeting.

In addition, the flyer gave the names of key Jewish leaders actively involved in health care and other areas, which we will not print or distribute via this medium.

“We have to take this crime very seriously,” said Morales, who added that the flyer was not only distributed in Cypress but also in other cities in the County.

“Our police department’s investigation is being coordinated with the OC Intelligence Assessment center and the Joint Terrorism Task Force,” he said.
“I know I speak for all of my Council members when I say racism and hate has no place in this city,” the mayor said.

Don Hahn, Director of Operations for OC Human Relations Commission, also appeared at the meeting to discuss the hateful information being posted around the county.

“Unfortunately, Cypress is not the only city that has received that type of flyer in the last couple of weeks,” said Hahn. “We’re sorry that your city has been receiving some of these flyers over the past week or so,” he added.

“In the past two weeks, residents in multiple cities received flyers with antisemitic rhetoric,” said Hahn, noting that the OC Human Relations Commission and the Hate Crime Prevention network “remain united against hate,” he added.

Norma Lopez, Executive Director for the HCPN said “we know that this misguided targeting of our Jewish neighbors is a form of hate and bigotry that deeply de-humanizes members within our community. We will continue to call out antisemitism, and all hate, when and where we see it.”

The spokesperson said they were attempting to educate the community and others “about all the forms of bigotry, hate and oppression at a time in our country when such activity is on an unprecedented multi-year rise.”

Katie Shapiro, a Jewish resident of Cypress, appeared during the oral communications portion of the meeting to complain about the city’s reaction to the hate flyer.

“You completely dropped the ball,” she told city officials, saying that the city had failed to either reach out to a local synagogue or call a rabbi after learning of the flyers.

“What we (Jewish community) don’t need is some vague presentation,” said Shapiro, noting that city leaders, in her opinion, should have immediately and “viscerally called out racism in our community.”

The investigation into the incident continues, city officials were told Monday evening.

Cypress could use election reform 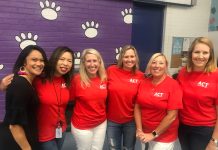