Have you seen more mosquitoes than usual in Orange County this year? It is 2020, after all. Mosquito and Vector Control District officials have found the first sample of mosquitoes infected with West Nile Virus in Costa Mesa, prompting another warning Wednesday to residents to help with the battle against the pests by tipping out stagnant water around their homes and using insect repellent.

The sample of mosquitoes was collected Aug. 27 from Fairview Park in Costa Mesa and the batch tested positive for the virus on Friday, said Heather Hyland of the Orange County Mosquito and Vector Control District.
Two Orange County residents, including a child, have been infected with the virus so far this season, Hyland said.

The infections occurred in Anaheim and Huntington Beach.
According to the district, as of Tuesday, samples testing positive for West Nile Virus were found in the following cities: See info graphic below: 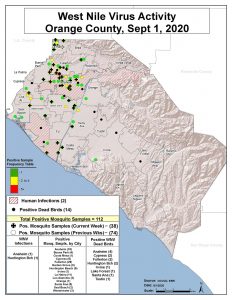